By 10:00 pm on Thursday, I am totally burnt out for the week and refuse to absorb any more information. I am taking only four classes but they should give me 2 credits for philanthropy class since we have an extra an hour and a half session every class day. So, today, I had four classes in a row from 8:30am till 2:15pm, JUST LIKE HIGH SCHOOL! Then, literature hall meeting, yes a theme hall – where we read and discuss more books and stories. In theory, I am also supposed to go to swim practice afterward but I am dropping it after all because I need to drop something – not international club, not dance, not student restaurant nor environmental club. Cooking and grocery shopping add to these workload and Lin is confident that I will stop cooking meals myself by Spring Break (note the capitalization, it marks holiness). Despite these apparent complaints, you can tell that I am secretly in love with being busy (not quite a secret anymore now, is it?). It keeps me moving, and gives me an illusion that I am actually doing something useful. How good it is to be back in a college setting!

But I still miss Peru.

And strangely enough, I even miss UNSA – Universidad Nacional de San Agustin. Abimael Guzman – the leader of Shining Path – was an UNSA student. He also went to a high school that’s right around the corner from my house. Shining Path is a leftist political violence that started in Ayacucho (highlands) and moved up to Lima, the capital. It caused so much misery and pain and death, mainly because the movement poeticized death. The followers are supposed to cross the sea of blood to reach utopia.

Evidently UNSA also hosts students and faculty members that support Pizango, a presidential candidate with a heart for on protecting indigenous rights. He often speaks up against Amazon forest deforestation and commercial exploitation, I believe… Believe because I followed him through a combination of Caroline’s translation and my reading newspapers with the help of a dictionary every seven words. Pizango is against water privatization. His party symbol? A big, blue drop of water. He positions himself directly opposite to that of Alan Garcia, the current president, who’s all about development and industrialization. He published an article in Peru’s El Comercio, titled El Perro del Hortelano. I just found out that you can access to its translation here. When I was in Peru, even Google engine generates only links in Spanish – it may have been a good thing for my Spanish.

You don’t need to look elsewhere to sense the tensions between development and environmental preservation. It is not surprising to find murals and signs that extol environmental virtues at UNSA.

These pictures from UNSA were initially intended for my history paper: Peru’s Past in Peru’s Present. I was planning to analyze murals and statues at UNSA campus and around Arequipa. Then, I found an easier method: to study films and books! As a nerd, I had been appropriating previous student’s books and reading novels on Peru from the beginning. So I just used them for my paper and made a bold claim = books and films show that Peruvians are more resented against their government rather than Shining Path itself for the tragic events from 1980s onward. 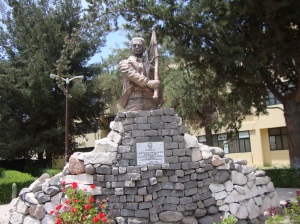 This one is to “Arequipa’s heros that fought against military dictatorship,
June 1950, and permanent validity (?) (vigencia) of human rights”

Walk from home to school, writings on the pedestrian bridge

In case anyone’s interested in movies for spring break, these are the films I used for paper: